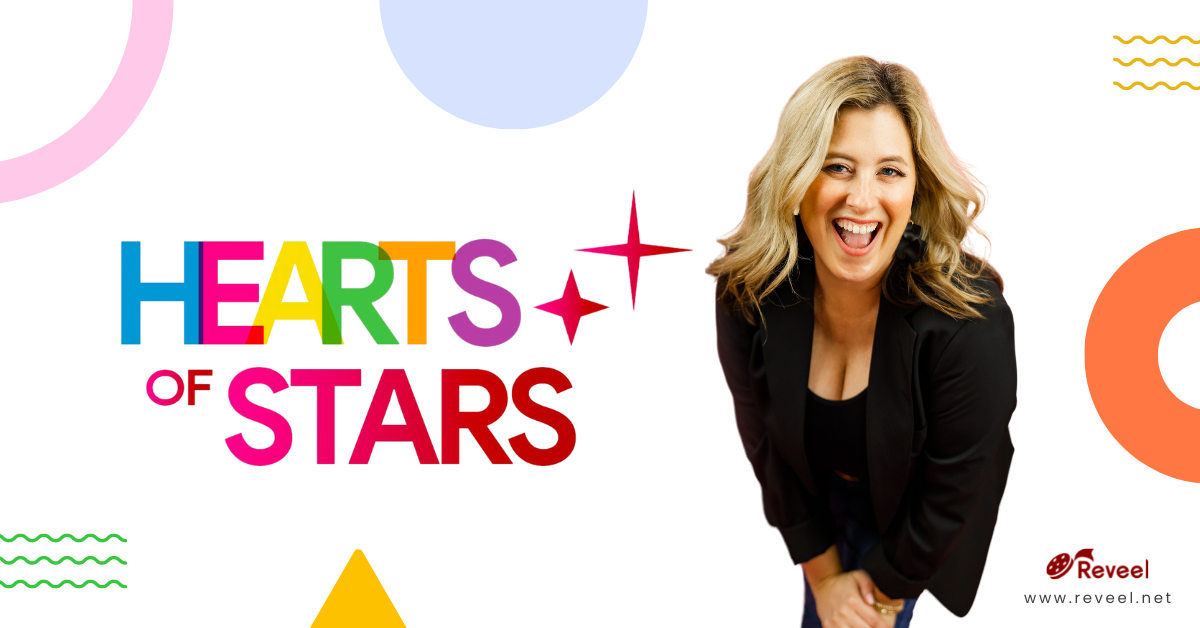 A lot of networks have made names for themselves with feel-good, family-friendly movies, and a bold young streaming platform named Reveel is bringing that same feel-good positivity to you in November. It is debuting Hearts of Stars, a new series that gets up close and personal with your favorite celebrities from feel-good rom-coms!

Hosted by Jennifer Silliman, Hearts of Stars is unique because the host is, quite simply put, a fan. Jennifer is also a filmmaker, mother, wife, and most importantly, a fan of feel-good rom-coms who one day decided to reach out and chat with her favorite rom-com actors/actresses on camera. She loves nothing more than to connect with beloved celebrities and letting their fans see the things that are close to their hearts.

Jennifer's conversations with her celebrity guests take place out of the studio in intimate, casual settings for a more down-to-earth atmosphere. You'll learn about their lives on-screen, off-screen, their families, and their passions.

The guests on Hearts of Stars range from leading men and ladies to those who are behind the scenes directing or writing, but all of them have one thing in common: they love what they do and they love sharing their stories with fans. Andrew W. Walker, Joshua Shultz, Cindy Busby, and Nikki Deloach are just a few of the actors and filmmakers who will be featured on Hearts of Stars, with many more to come.

The first season for Hearts of Stars will be available to watch for free on Reveel on Saturday, November 5th with Andrew Walker as the inaugural guest. New episodes will be released every Saturday, with each one focusing on a different celebrity.

Can't wait until November 5th? In the meantime, check out Jennifer's pre-season interviews with beloved actors/actresses.

Actor Andrew. W. Walker is known as a leading man in Hallmark movies but there is a lot more to Andrew than his experiences on-screen. He is also an entrepreneur, father, brother, friend, and husband. In this Hearts of Stars episode, our host Jennifer Silliman learns about Andrew’s life off-screen as they chat about the importance of mental health, self-love, owning a pressed juice company, and his family.

Actor Ryan Paevey (General Hospital, Coyote Creek Christmas) started out as a male model and then got his first Hallmark role in 2016 with Unleashing Mr. Darcy. Now, he is one of the leading men of Hallmark and has starred in over 12 Hallmark movies. Our host Jennifer Silliman sits and chats with Ryan Paevey about his life in the public eye and his many passions from making jewelry to owning motorcycles.

Wes Brown (actor in Christmas at Graceland and Christmas in Mississippi) has more than 44 film and TV credits to his name. He has just wrapped filming the upcoming Hallmark film Haul out the Holly and recently took on a villainous role in BET’s Stalked Within. Our host Jennifer Silliman chats with Wes about playing a villainous character, the joys of fatherhood, and meeting fans at Romadrama in Palm Beach 2022.

Brittany Bristow is a Canadian actress that has been in the industry since she was six years old. She has starred in three Hallmark movies that were released this year and has plenty more on deck for next year. Jennifer Silliman sits with Brittany to chat about her upcoming wedding, her first lead role in Holiday Date, and techniques for self-care.

Nikki DeLoach is known as an actress but is also a producer, writer, and an advocate for mental health. Nikki joins our host Jennifer Silliman for an honest conversation about their similar struggles with postpartum depression and parenting a neurodivergent child.

Heartland’s Cindy Busby is known for her many roles in Hallmark movies and TV shows. You may have fallen in love with her on-screen but in this episode of Hearts of Stars, our host Jennifer Silliman chats with Cindy about her life off-screen. Cindy discusses why Cameos are important for her and the many charity organizations near and dear to her heart.

Neal Bledsoe is known for playing princes in Hallmark movies but with 60 credits to his name, he has had a lot more roles than that. Jennifer Silliman chats with Neal as he’s working out in a candid moment to discuss how Hallmark is therapeutic, what he’s writing, and his interest in exercising.

Riley Weston (Sister Act 2, Christmas at Water's Edge) joins our host Jennifer Silliman to make a special announcement about a new upcoming Hallmark film. Riley currently lives in Nashville where she spends most of her time writing screenplays and creating music.

Reveel only hosts original and independent content, has absolutely no disruptive ad breaks, and is completely free to anyone who signs up. Learn more about Reveel on our website.